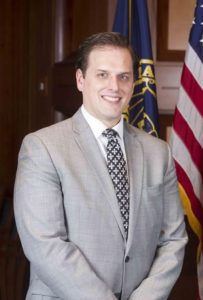 B. Colin Hobbs graduated from Texas A&M University in 2007.  He moved to San Antonio for law school and in 2010 he graduated with oral advocacy honors from St. Mary’s School of Law, having received the prestigious “Order of the Barristers” award (given to the top 10 advocates within a graduating class).

He worked as a felony defense attorney in Beaumont, Texas, as a prosecutor for the Jefferson County District Attorney’s Office and as a prosecutor for the Montgomery County District Attorney’s Office.  During this time, he prosecuted misdemeanor and felony cases such as DWI, assault (domestic assault and non-familial), possession of marijuana and other controlled substances, theft crimes, Internet crimes against children, and sexually based offenses.

But San Antonio still felt like home to Mr. Hobbs and he knew that with Fernando Gireud’s experience in child support and immigration cases, the two could create a partnership that met a range of legal needs for clients. Gireud | Hobbs, PLLC, began in 2015.

Outside of work Mr. Hobbs enjoys running, golf and watching his Fighting Texas Aggies whenever possible.

HOW CAN WE HELP

We had a great experience with Mr. Gireud who helped us with our immigration case. He explained everything in great detail and gave us insight on all of the scenarios that could play out. We are very satisfied with the service that he provided.
Fernando was recommended to me through a friend of mine who also hired him as his immigration attorney and has already got his green card. Sure enough, just like what my friend described, Fernando definitely proved his excellence in the law and successfully helped me get through the N-400 Naturalization case. I'm very glad that I made the right decision and will highly recommend him to anyone who wants to look for a professional, experienced and hardworking immigration attorney! I would recommend him to anyone who needs an excellent immigration lawyer.

Successfully Dismissed Case - Colin handled my case with an exceptional level of professionalism from the moment I first spoke to him on the phone. I was initially not very optimistic about my case on account of having prior un-related, and unfavorable legal encounters that could have worked against me. But my experience with Colin was different. He lucidly explained every facet of my case and engineered a well thought-out legal strategy that he put into motion right away.   The level of service I received from Colin and his team was exceptional. Once his strategy was in place, the only encounter I ever had with the court was to show up to announce my name in attendance - the rest was all Colin. It was really that simple. I highly recommend Colin and his team. Thank you for all your hard work Colin.

Assault - Dismissed I hired Mr. Colin for an assault case a while back. I was really scared because I'd never been arrested before but a friend gave me his phone number and said he knew his stuff. He asked me a lot of questions, explained the process and helped me gather evidence against the other which convinced the DA to dismiss the case because I was just defending myself!

Fantastic Attorney! Last year I was charged with DWI with a breath test of .18 - at first the prosecutor wasn't willing to offer anything less than 2 years probation on a DWI based on my criminal history and the breath test results. Mr Hobbs convinced the prosecutor to watch the video there in court while I was in the courtroom. He managed to get a 6 month deferred probation offer on a Class B Obstruction of a Highway which is MUCH better than a DWI and eventually will get dismissed. Since I won't have a conviction I was able to keep my job and while I hope I don't need him again, he'll be my first call if I do!